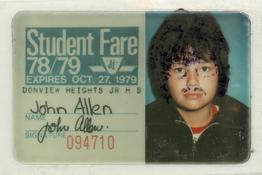 Me in grade 8.
John's grade five teacher had the idea he might benefit from a two day enrichment program in paper cut-out animation. From that time on, the 10 year old spent an unhealthy amount of time making miniature sets, actors and props, then filming them on 8mm and super8 cameras in his parents' basement. After having his hopes of working in the film or television industry crushed by his Jr. High guidance counsellor, John pursued a career in commercial art.
He quite happily freelanced as an illustrator and graphic designer in the print industry. After about five years he was given the opportunity to work as a graphic artist for a television show. He was quick to find a way to stick around and make himself useful in the other media. Holding a variety of jobs in the art department, John has enjoyed being a prop maker, scenic artist, carpenter, special effects tech, set decorator, set/prop designer, set/prop construction supervisor. Recently, John has been applying his 25 years of work experience in the role of production designer.

Some of the shows John has contributed to are: Shining Time Station, Noddy, Deep Water Black, Tales from the Longhouse, Brats of the lost Nebula, Henry's World, Jo Jo's Circus and The Doodlebops.